Palermo- once experienced, never forgotten. That's the motto of Palermo. It is true of the whole of Sicily, a small island but with a history as ancient as the ancient greeks. The ancient Greeks settled on the shores of Sicily and had thriving communities there; they built massive temples to their gods and amphitheatres that seats up to 19,000 people. Ancient Rome fought the Carthaginians (modern day Tunisia) over Sicily in three punic wars. Two adventuring Frenchmen from Normandy, France established their kingdom in Sicily and built cathedrals and castles of immense proportions and beauty, borrowing from Arab and Byzantine influence. The mosaics in some of these churches is second only to those of the Haggai Sophia in Instanbul, formerly Constantinople. Sicily was associated with various christian crusades and with the Knights Templars. Over the subsequent centuries they were ruled by a whole hosts of other Europeans. While being a land of immense wealth, the wealth was concentrated in the few landed gentry. The rest of the Sicilians were poor contadinas. The land is still being farmed by small farmers, no big tractors, no massive trucks to haul produce picked too soon. The salads on restaurant tables were probably picked the same morning- at least they tasted like they were. Sicily is in a class of its own- wild, yet one can find respite. It has everything- beautiful monuments, lovely people, incredible food and quaint old towns. I am still being asked, after returning, why Sicily? It was a trip to Southern Italy the year before that made me decide on Sicily. The movie, 'The passion of the Christ' made me take that trip to Southern Italy, to Matera where it was filmed. While in the south, I visited the Baroque city of Lecce. I couldn't get enough of those cute Baroque buildings. I read that most of Eastern Sicily was rebuilt in the Baroque style after the big earthquake of 1693. On further investigation I realized that Sicily is the place to go for a Baroque aficionado like me. Then plans were made and off I went. Did I see Baroque? Sicilian Baroque is in a class of its own. Sicily is her own persona. It does not apologize for its state of poverty and decay; it does imitate mainland Italy. Sicilians are Sicilians first and Italians second. They travel on a Sicilian identity papers, not an Italian passport. I left my heart in Sicily. Why not Sicily?
Posted by annechung at 7:13 AM No comments:

I wrote this while waiting for my flight in Rome Fumicino airport. I just flew in from Catania, Sicily. I'm going to Paris to catch another flight for Los Angeles. Three flights altogether before I finally get home. Two weeks ago I was heading the other way, landed in Catania late at night. It was raining and it was cold and wet, I thought, Oh no, this is going to ruin my vacation. My sister in law came on a different carrier and arrived at 1.15 am. The first sight of Catania was terrifying; it's an old and moldy city and in the dark, it looked even more ominous. . We stayed in a hostel which is a dilapidated pallazo. One can almost expect the Adam's family to appear and greet you. It rained the next day too but it didn't stop us. We took the train to Taormina and to Acireale. It was fun. For the next week, we had great weather. Siracusa is a beautiful Baroque city. From there we went to other Baroque towns namely Noto and Ragusa. We had great weather for visiting Agrigento, a city with a long Greek history. We had great weather while visiting the valley of the temples - temples built by the Greeks some 2600 years ago. It started to rain again while we were in Palermo. Palermo has some incredible churches- Monreale, Palatine chapel, La Martorana and a whole host of others. There were all so immense and absolutely gorgeous. The rain didn't relent for our last two days in Catania. We took the train, the circumetna that stopped at all the little villages that ring the bottom of Mt Etna. Mt Etna was covered with snow and in the towns at higher elevations, the rain turned to snow. There was an accumulation of snow. It was so wonderful; everything was nice and green. Mt Etna is a very active volcano; it has erupted many times even recently. There is evidence of it everywhere. There are fields of lava rock all over the mountain side. The villages that was destroyed usually rebuild. Even the railway has to build new tracks. Some even use the lava rock to build houses. The surrounding area are undulating hillside and are all grown with fruits, vegetables and olive tree, The food is so great- pasta, bread, salads, seafood and pastries. I think it is paradise on earth. Sicily is as luscious as the pear we ate that was grown in Adrano, a little village near Mt Etna. I strongly recommend visiting Sicily.
Posted by annechung at 3:47 AM No comments: 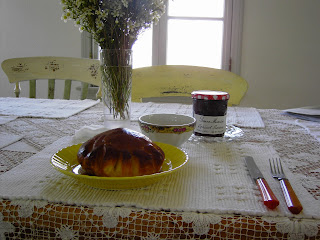 I feel like a gipsy. I love feeling like a gipsy. I was at the farmer's market in Santa Monica again. It is my weekly haunt. Today I went to the bank to get some Euros for my trip. I walked outside the bank and sat on a sidewalk to count the money that the bank teller gave me. Here am I in tatty clothes and tussled hair, counting out E1,000. I prefer to use cash when I travel, so I wouldn't have these pesky credit card bills following me home. I look like a begging gipsy and I love it. I guess that's why I love traveling so much, there's the anonymity. The exchange rate sucks so bad. I don't think the bad exchange rate and high ticket prices have stopped people from traveling. I called Air France just now to secure a seat assignment. The agent told me it's a full flight and all the window seats are taken. Fine with me, I'm an aisle seat person. I remember my first trip to Paris. It was at the same time when I spent Christmas in London with family. I took Eurostar and headed to Paris. It was pretty intimidating, it was cold and gloomy and everything was new. It was a very liberating experience. I watched French people going about their business, I listened in on conversations in French not understanding a word. No matter. Paris is supposed to be a romantic city for couples. It is just as magical being there alone. There has been lots of other first, to Provence, to Sevilla, to Rome, the list goes on. This Saturday I'm embarking on my 14Th trip to Europe, to Sicily for the first time.
Ciao, a tutti!

Posted by annechung at 4:07 PM No comments: 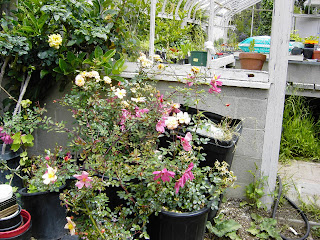 I never had any budget big enough to eat in restaurants with Michelin stars. Most of my food experiences are in simple restaurants, cafes and street corners. They are, nonetheless pleasant memories of very tasty food. I remember clearly this slice of quiche with an incredible smell and taste to match. The smell of that bacon used in that quiche was so fragrant. It is forever etched in my mind. I will never forget. I remember the young frisee lettuce in Spring found in salads all over France. I took my two young nieces, they couldn't appreciate it, so I ate all their salads and craved for more. "Mesclun" is the name they use. We get them here in our supermarkets but it is nothing compares with their French counterparts. When in France, I make sure, I never pass up the chance of buying some calixsons for personal consumption. They are little cookies made of almond paste with a layer of royal icing. I love them. While in the Dorodgne area of France I tried the delicious 'aligot', a dish unique to that area- it is a mixture of cheese and mash potatoes. It was served with duck confit- the platt du jour that night. In the same town, over lunch, we had already devoured a few servings of 'escargot'- snails, cooked in a delicious butter sauce which we sopped up with lots of French bread. MMMMM good! I remember my first trip to Avignon; there is this patisserie that makes the world's best Florentine cookies, so rich and chocolaty! I've had really incredible rustic food bought at farmer's markets- the homemade sausage, fat and juicy eaten with a rustic farmer's bread roll. In Bayonne, one year, I went to a Moroccan restaurant and had lamb tagine with couscous. That was an fascinating experience. I remember another favorite, french yoghurt. It taste so different from any we get here. It is so much more delicious. It was in Nice that I ate my muesli with yoghurt. I tried to recreate the experience at home but it failed the taste test miserably. I could go to France to just eat muesli with French yoghurt. If you've been in a French supermarket, you can find a vast array of yoghurt in cute little glass jars. C'est bon! Of course, mai oui, there are other memories but these are the standouts! The Caussolet and all the cheeses and tarts and macaroons...........
Posted by annechung at 7:25 AM No comments: 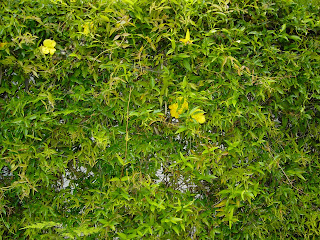 Make each day your masterpiece. Life is now. John Wooden
Life is not a dress rehearsal. Unknown
You've got a problem? Good! W C Stone
"Come to the edge', he said.
They said, 'we are afraid.'
'Come to the edge,' he said.
They came.
He pushed them.
And they flew."
Guillaume Apollinaire
"It is our duty to proceed as if limits to our ability does not exist." Teilhard de Chardin.
Posted by annechung at 6:48 AM No comments:

in the direction of your dreams. Live life as you imagined. The daffodils I bought yesterday have all opened. I love daffodils, even the name "daffodil" evokes magic and romance. I took these pictures yesterday and I thought I shouldn't waste them; I should use them like what I'm doing now. 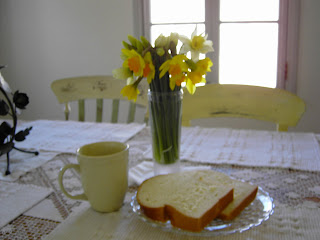 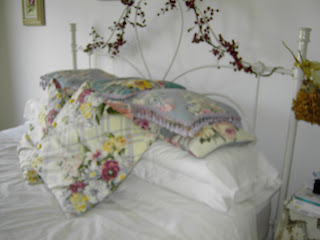 Posted by annechung at 3:28 PM No comments: